Most transposing instruments sound lower than written. The name of the instrument indicates the note that will sound when a written C is played. On a Bb clarinet or trumpet the written pitch C produces a sound one step lower, the Bb. The practice in tonal music is to write the transposed part for a Bb instrument in the key signature one step higher. For example, if the concert key (sounding pitch) of a composition is F, write the part in the key of G for a Bb instrument.

When playing the written pitch C, a horn in F produces the sounding pitch F, a perfect fifth below the C. If the concert key of the music is E major, write the horn part in B major. When playing the written pitch C, a clarinet in A produces the sounding pitch A, a minor thirds below the C. If the music were in the concert key of D, the clarinet in A part would be transposed up to the key of F. Scores written in the eighteenth and nineteenth centuries commonly contain parts written for natural horns and trumpets in various keys. In most cases the parts for these instruments without valves were written in the key of C, and the sounding pitch was below the written part. Thus, a horn in Eb would sound a major sixth below the written pitch. Conversely, trumpets pitched in F, E, Eb, and D sound higher than written; those pitched in B, Bb, or A sound lower than written.

All ranges given for instruments in this text are written ranges, after trans-position. Remember that you must TRANSPOSE UP from the concert pitch to the written pitch in almost all cases. The best way to transpose without errors is to think of the notes as scale degrees in the new key. For example, if a tonic triad is outlined in the concert key, a tonic triad must also be outlined in the transposed key. The following chart shows the interval and direction of transposition for some common wind instruments. A practical concert range is shown for reference. 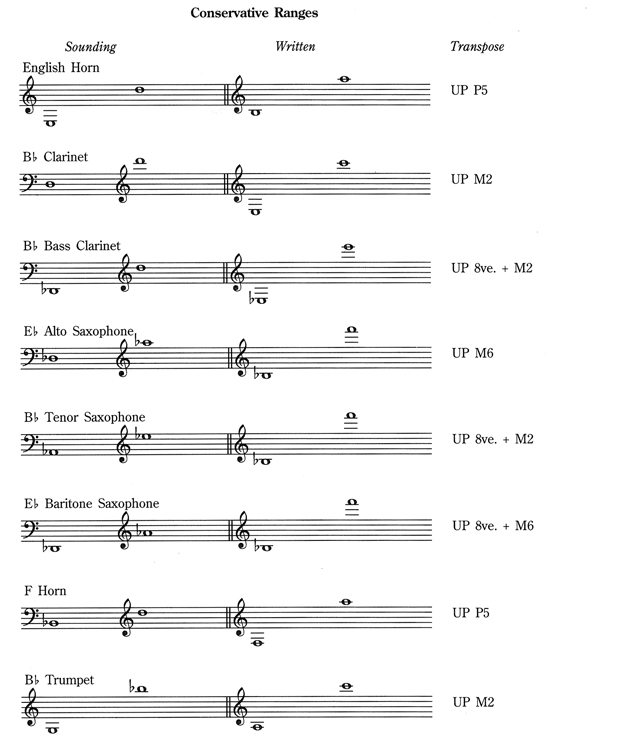 A condensed score, or reduction, shows the pitches present in the full score on three or four staves. Each choir might be represented on a single staff. It is often helpful to condense an open score to identify more clearly the harmonic and melodic content, particularly if the open score is transposed. A piano reduction is written on a grand staff, and nonessential doublings are deleted so that it can be performed by a single player. Making such a reduction entails identifying primary lines and moving the pitches from their transposed state to concert pitch.

Previous Lesson
Back to Course
Next Lesson