Good pedagogy dictates that we clearly identify learning objectives and creatively engage students in activities that bring about the desired changes in behavior or thinking. In an integrated theory program, the broad goal is for students to increase their understanding and awareness of the relationship of sounds in time. Aural skills are an intrinsically interrelated component of comprehensive musicianship (CM) training. Any distinction between written skills (part-writing, composition, analysis) and aural skills (dictation, sight singing) is an artificial one. The goal of music theory training is, according to Leonard Meyer (Explaining Music, 1973), “to refine the aural imagination, and to sensitize the cognitive ear.” Bruce Benward called it the seeing ear and the hearing eye. Michael Rogers offers the following diagram as the goal of theory (musicianship) training: 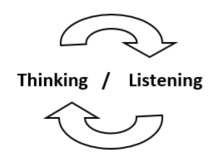 What do we mean by aural recognition? The word recognition (re-cognition) implies that we transfer existing knowledge from an earlier context or experience; we cannot recognize what we do not already know. There are multiple contexts for learning in music. The music itself provides a momentary context, while the listener brings his or her own experiential context based on the music they have played, sung, heard, or analyzed previously. If we prescribe to a constructivist theory of learning, then this experiential context is a critical factor in devising learning activities. Coherence is based on each student’s set of experiences.

It is the musical context that provides meaning for each element or component, and this allows us to accurately identify each element in relation to others. At the most basic level of knowledge we identify or label the building blocks of a piece of music. These are studied in the music fundamentals class, and students should be fluent in identifying intervals, triads, key signatures, and other basic facts. Prior experience with music determines what students have learned intuitively, and the ways they process aural stimuli. Aural stimuli are easily identified if related to known patterns that have been embedded since childhood.

At the next level, pattern recognition is the key to understanding grouped elements or combinations of pitches and rhythmic structures. The goal of aural skill training is to equip listeners to hear sound as meaningful patterns. Aural recognition is the ability to identify contextually a sound fragment or chunk of music. I refer to this as hearing in scale degrees. There is some debate as to whether practicing the identification of atomic particles, such as intervals or individual chord qualities, is valuable in itself, compared to dealing with individual musical elements in a larger tonal context. Both have value at different stages of development. As mentioned earlier, fluency with the basic building blocks is a precursor to more advanced aural discrimination, but does not need to be done outside of a musical context.